Overweight is a growing problem for women planning a child. The whole-body training supports in a natural way.

The effective exercises are practiced along with Latin-American rhythms. Sarengue® is recommended for people suffering from overweight and back pain, for pain and cancer patients and recently also for women planning to have a child. Photo: Stöcker-Gietl

pass on their knowledge Regensburg.

Legs step forward, backward, sideward. The hips sway along slightly. “And now the Heracles”, Dr. Silvia Weidinger-Köppen invites the women to do. Arms are “W”-shaped and move along with the rhythm of the music. “Do you feel the effect? If you are able to do so during the whole song, you are really good.” Sarengue®, this is how the whole-body work-out training is called which the gynecologist from Regensburg has been offering since September for women planning to have a child. “It is still too early for success stories, but I am convinced that they will soon be reported.”

Being overweight means being less fertile

About 15 per cent of all couples with a desire for children remain childless permanently or temporarily. The demand for fertility treatment has been increasing for years. According to professor Monika Bals-Pratsch from the specialist clinic for fertility medicine Profertilia in Regensburg, overweight and the resulting metabolic disorders or diabetes resulting from overweight are the most common reasons why it does not work out with a pregnancy through natural means – as about one third of all women are already overweight before their pregnancy. But this fact even applies for men: Being overweight means being less fertile. This year the subject nutrition and obesity when having the desire for children is the key topic of the practical seminar in Regensburg, which is held by the “quality circle gynecology”, the “competence network endocrinology” and the “network desire to have children Regensburg”.

It lasts about half an hour until Weidinger-Köppen has achieved to explain the eight step combinations for Sarengue® and to have them practiced with the “new ones” in the training. There is a Merengue as well as a Salsa basic step, a salsa side and back step, the Heracles, boxing arms, the hexagon, the box and the twist. Eight exercises destined to train the whole body and also the blood circulation and the mobility of the pelvis, important thing for women with the desire of children. One hour of training, says Weidinger-Köppen, is as effective as a work-out with fitness equipment, but the fun factor is much higher. Training is held in the Sarengue® center in Regensburg-Schwabelweis, open since September and managed by Nicole Gorski. You can do free trial training and afterwards one training hour costs eight euros (six euros from the second training within the same week). You do not have to conclude a contract, explains Helene Schaifele, instructor.

This program was developed by a dance teacher from Zirndorf for her own physical problems. After having suffered from three slipped discs she continued to have permanent back pain, a so-called calcified shoulder and arthrosis in her knees. Together with a befriended physician Alexandra Bernhardt invented this gentle muscle building program along with Latin-American rhythms which can be adapted individually according to the physical problems. Prof. Dr. Thomas Loew, chief physician at the university hospital Regensburg, took this whole-body work-out training up for the weight loss program Optifast. And he was surprised by its efficiency.

In his studies about the treatment of highly obese patients he proved that Sarengue® trains the problematic areas hips and belly as effectively as no other sport activity practiced within the same timeframe. Up to 380 kilocalories may be burnt within one hour of training. Furthermore, the special motion patterns along with salsa and merengue music are especially joint-friendly. In Regensburg the eldest participant is 82 years old, says Weidinger-Köppen.

The gynecologist reveals that according to her own person this fitness program is like an addiction. “I notice how good it is for me, it clears my mind and frees from stress.” In the meantime she is present in the Sarengue® center three times a week, she also works there as an instructor together with Helene Schaifele.

Practicing the training and dreaming about the seaside

The women from the Wednesday circle are already experts in Sarengue®. Tensing the buttocks as if to hold on a coin, relaxing the shoulders and then stepping as if doing a woodland walk, that is how the training starts, they explain. One hour of music which makes them dream of a holiday at the seaside. Afterwards, the women say, you feel exhausted, but you are full of endorphins.

Also the pain therapist Dr. Roland Leger from Nuremberg sends his patients to do the training. Especially chronical pain patients report about positive experiences. Thanks to the training of the small muscle group of the cervical, thoracic and lumbar spine, the musculoskeletal system is stabilized and mobilized.

Gynecologist Weidinger-Köppen is going to offer a course for cancer patients from December. Moderate training when having a cancer diagnosis is advised, says the physician. Thanks to the step sequences and the arm movements the lymphatic flow is improved. And the Latin-American rhythms make you feel good. This is very important if you have to face a heavy illness or the unfulfilled desire for a child. 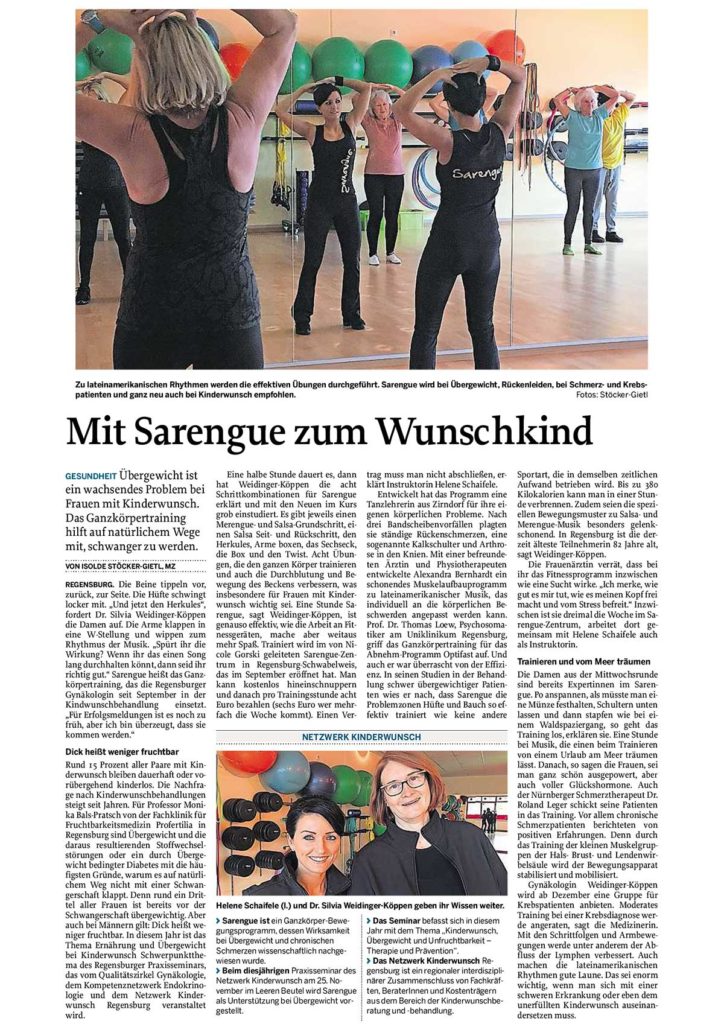